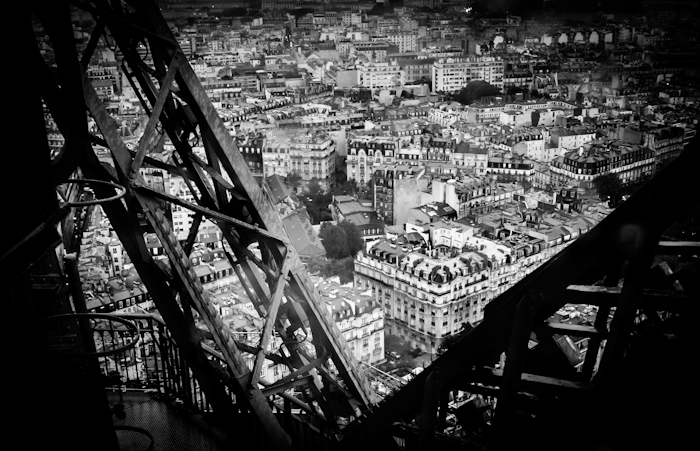 The restaurant is situated on the second level of the Eiffel Tower, 150 metres above ground. From my pre-trip research it receives mixed reviews, swinging wildly between being excellent and an abominable tourist trap. I was hesitant to commit, but in the end decided that the experience would probably be worth the risk.

We had our concierge book a table as soon as reservations for our desired date opened, 3 months in advance. The request for a window table is one that I am sure the restaurant continually receives, and we were lucky to have our request granted – giving us a view towards Les Invalides in the East and to the South East down the Parc du Champ de Mars and Ecole Militaire. We were seated with daylight still in force, and as the sun set and the lights of the city started to come up, accompanied by soft rain against the window, the decision to dine here seemed worthwhile.

The restaurant has a private elevator between the ground and second floor, which did prove useful as the public elevators were reduced in number due to maintenance, resulting in long lines to ascend and return. There is also a small set of stairs from the restaurant where you can visit the second level and then return via the same stairs to the restaurant.

In general the food was good to very good. Highlights for me were: the “Green asparagus from Provence and morel mushrooms, yellow wine sauce” which was just a stellar dish of simple ingredients, heightened by how well they worked together and the “Bresse poultry breast with tarragon, spring vegetables” which continued the same theme of complimentary ingredients that weren’t complicated for the sake of it. The “Wild strawberry and mango contemporary vacherin” was brilliant as well, even though I would have thought I’d prefer the “Tower bolt” which was good with its contrasting textures, but there flavours of the vacherin won out.

The service was mixed, wavering between the professional standard expected of this venue and a few interactions where it was evident that it would be much easier for the staff if we would stop bothering them. I’ll also note that a question via a couple of emails after our return to Australia went unanswered, which is in stark contrast to other venues that have gone to lengths to assist in answering questions even though we were departed tourists with no immediate expectation to return.

I would recommend it as a once-off experience, despite the high cost which was 210 euro per person for the dinner degustation plus wine. The prices at lunch excluding the weekend tend towards being more reasonable. The food is generally very good and did hit some high notes, and the view is simply brilliant.

We had one bottle of wine here, the 2009 Domaine Ramonet Les Enseignères from Puligny-Montrachet. Despite being a “village” level wine, this punched well above its designation (and vintage reputation as well!). A powerful and complex nose of florals, citrus, wax and minerality. The palate continues the impression of fruit power, the ample richness is brought together with good acidity/minerality and fine length. I enjoyed drinking this right now in its life, it is immediately appealing and I think well balanced as it stands. 91/100